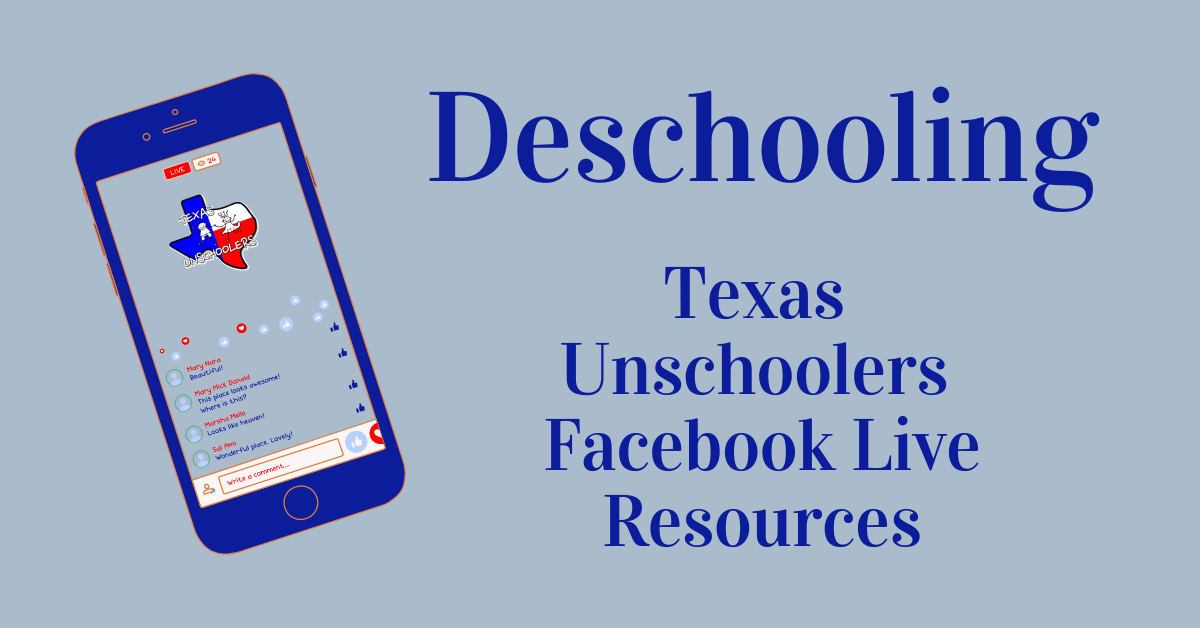 Rachel Miller & Shannon Stoltz hosted a Facebook Live in the Texas Unschoolers Group on Monday, October 26th to talk about Deschooling. The replay is available to watch in the group. We covered:

Shannon is a veteran unschooling mom with four “kids” (23, 21, 18, and 16) and a sometime contributor to Texas Unschoolers – usually on topics related to dyslexia, autism, adhd, and following kids’ diverse interests.

We wanted to provide y’all with some links to follow-up on various quotes & resources we mentioned. We’ll also come back and continue to add any relevant materials brought up during the Q&A portion or posted later.

We’ve tried our best to credit quotes, thoughts, & ideas to the person/website/source where they originated.  Any failure to attribute or attribute correctly is not intentional.  We’ve been reading, listening, and participating in the Unschooling community for over a decade – so know that if we personally share something particularly profound, it’s due to the hard work and encouragement of the thousands who have come before us.

Deschooling allows us to contemplate a new way.  It allows us to see how learning really happens. It gives us an opportunity to examine our paradigm around education and life in general and gives us new perspective to work with.

Deschooling is about learning to trust your child. You are building trust between you. When you impose school-like structures, your child can’t relax in the knowledge that those days are over. You’ll need to back up and give more time until they can trust that school is over.

Issa Waters
Everything You Need to Know About Deschooling Before Unschooling

How long does Deschooling take?

If you had a less than stellar school experience it might be easier to walk away from all the schoolish ways of learning, socializing and connecting. Still, since unschoolers and homeschoolers are such a small segment of the general population, things like back-to-school sales, football games, and prom season may trigger some wistfulness that you or your child harbors.

Sue Patterson
What Does Deschooling Mean?

If you had only ONE year—and then it was all over, what would you do? Four seasons. Twelve months. 365 days.

Do that THIS year. And the next.

That’s how unschooling works. By living life as if it were an adventure. As if you only had a limited amount of time with that child. Because that’s the way it IS.

Kelly Lovejoy
Unschooling: Getting It (Kelly’s section is near the bottom of the page.)

We have forgotten that children are designed by nature to learn through self-directed play and exploration, and so, more and more, we deprive them of freedom to learn, subjecting them instead to the tedious and painfully slow learning methods devised by those who run the schools.

Studies over many years have found that behavior modification programs are rarely successful at producing lasting changes in attitudes or even behavior. When the rewards stop, people usually return to the way they acted before the program began. More disturbingly, researchers have recently discovered that children whose parents make frequent use of rewards tend to be less generous than their peers.

Alfie Kohn
The Risks of Rewards

When I use coercion instead of conversation in attempts to “teach” them the things the world might offer them through harsh lessons, I am using fear and privilege, not respect and liberatory relationship-building.

Unschooling is more like a dance between partners who are so perfectly in synch with each other that it is hard to tell who is leading. The partners are sensitive to each others’ little indications, little movements, slight shifts and they respond. Sometimes one leads and sometimes the other.

If children lose academic skills over the few weeks of summer, then did they really ever learn those skills?  It must have been pretty shallow learning.

Peter Gray
Facts and Fiction About the So-Called “Summer Slide”

What DO we DO while we are Deschooling?

Read a little, Try a little, Wait a while, Watch.

When I bring wonderful, new, different and intriguing things into our lives without any pressure or expectation, our wonder and enjoyment increases. When I tickle our senses with new smells, tastes, sounds and objects, we engage more fully with our world.

We have got to look for win-win, because when we are all lifted up and we are all comfortable, we all do better. But convincing someone who has that privilege to share it, is very much like us trying to make others understand that children are whole, complete beings. They do not need to grow into something, they deserve their wholeness just by being.

How to combat the doubts…

The day ‘deschooling ends’ and ‘unschooling begins’ won’t be lit up in bright lights — There’s no ‘magic moment’.  Life will just continue with the wonderful rhythm you’ve found, you’ll see all the learning that’s happening every day, and eventually you’ll look back and realize, ‘Hey, I think we’re unschooling.

Pam Laricchia
What is Deschooling?